Tom Cruise is back as IMF agent Ethan Hunt in the fourth installment of the Mission: Impossible franchise, and what a thrill ride it is!

After being broken out of a Russian prison, Ethan Hunt (Cruise) is forced to pick up the pieces of an assassinated IMF agent and take charge of the deceased’s crew of fellow agents (Simon Pegg and Paula Patton). They attempt to break into the Kremlin to steal the launch codes of nuclear missiles. But the plan is quickly thwarted by terrorists lead by Kurt Hendricks (Michael Nygvist), an insane Russian nuclear strategist who believes the only way for the human race to continue existing is to exterminate many of them through nuking them to oblivion. Hendricks destroys the Kremlin and frames Hunt and his team for the wrongdoing, causing the entire IMF to be disavowed. After pairing up with IMF analyst William Brandt (Jeremy Renner), Hunt and his team figure the only way for them to clear their names is to go rogue and travel around the globe in order to clear their names and save the world at the same time.

Spies, the threat of nuclear war causing the end of the world, a mad scientist, evil Russians, gadgets, and exotic locations; these factors  make Mission: Impossible – Ghost Protocol sound like a 1970s James Bond movie. Fortunately, this film has none of the goofiness of those dated 007 adventures. The agents being wanted by their own people is reminiscent of the plot of the first Mission: Impossible film, and perhaps its this against all odds aspect that made both the first film and this film work, but with a bit of the high octane action from the second film to boot. Hopefully time won’t make this film forgettable like the third film was.

Like this series’ predecessors, the action scenes are just freakin’ awesome! Seeing Cruise and co. back for the first time in years going through many twists and turns and seemingly impossible scenarios (and plenty of the series’ trademark face masks), like breaking out of a prison then breaking into the Kremlin, escaping from life threatening car chases and a sand storm, and all the other (forgive the pun) risky business Cruise has to go through. The scene of Hunt scaling the outside of the Burj Khalifa tower in Dubai (its 200 floors make it the tallest building in the entire world!), followed by a full on sand storm, give the audience an adrenaline rush that not many action blockbusters in recent years have achieved. The camera shots of how high this monstrous building send chills down your spine before Cruise even goes outside to “hang out”. 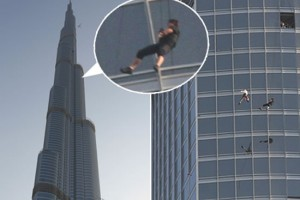 That’s a lot of windows for Cruise to clean.

However, having such an exhilarating sequence in the middle of the film makes the rest of the movie pale by comparison. There was simply no way any following scenes could top that, making everything that happens afterward seem kind of bland, including the finale. Three new subplots that are introduced involving Brandt’s shady past, a Russian arms dealer, and an Indian playboy come out of nowhere and seem tacked on as filler for the rest of the movie. Not that there is anything necessarily wrong with these scenes; they just would have been better if there was more of a lead up to them beforehand.

For the fist time in a long time, Tom Cruise is in top form, and very easily gets back into the groove of playing Ethan Hunt. Having done all his own stunts (including the Burj Khalifa tower sequence!) and taking all those punches, Cruise is certainly cruisin’ for a bruisin’. Though some may think doing his own stunts gives Cruise an excuse to show off, it proves how dedicated Cruise is to his craft and may actually allow viewers to briefly forget the crazy shenanigans Cruise has done in recent years thanks to Scientology.

Simon Pegg makes a welcome return as the film’s comic relief as IMF technician Benji Dunn, now an IMF field agent. Dunn’s hesitance to get into the muck of things and awkwardly fighting and using guns gives the film plenty of laughs throughout. All the actors play their parts well, though Cruise and Pegg are the only ones that really stand out.

Considering this is the first live action movie by director Brad Bird, known for his animated family features The Incredibles and Ratatouille, Bird has done a great job at helming an action blockbuster for the grown ups. Bird has certainly proved he’s got the chops to make more action movies in the future, and we should hope he does.

Being a huge improvement for the Mission: Impossible series after the unremarkable third film, Mission: Impossible – Ghost Protocol is a great example of how not all action movies have to be jam packed with lame CGI to make it entertaining. Let’s just hope the next mission we watch is just as spectacular and cool as this one is.