Rome was not built in a day, and neither was Sydney. Although the Harbour City had well and truly been founded by the time that world renowned architect, Harry Seidler, arrived, his modernist designs helped Sydney become a more internationally recognised city. The documentary, Harry Seidler: Modernist, is directed by Daryl Dellora and co-produced by Sue Maslin (The Dressmaker) and Charlotte Seymour, all of whom have been fascinated with Seidler’s story for the past twelve years.

“We first met [Harry] for an interview on a film about the design of The Sydney Opera House,” Maslin tells FilmInk. “Harry was a terrific supporter and lead protester when [Danish architect] Jørn Utzon was pushed off the Opera House project. Harry rallied architects in his defence. He took us around his Sydney buildings; it was a day of seeing the best architecture in Sydney. We realised that it was not just a job for Harry, but a passion. He had strong ideas, and for him, architecture was a philosophy. He devoted his life to it.” 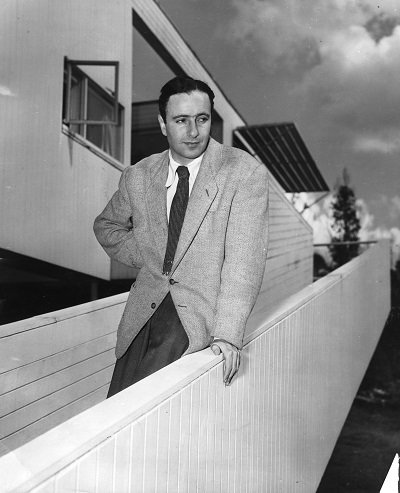 Seidler was born in Vienna in 1923, but he was forced to flee his home country in 1938 due to his Jewish heritage when the Nazi regime was taking over Austria. He studied in England, before being deported to Canada, as the British authorities suspected he was an enemy alien from an Axis country. Once he completed his studies with honours, he worked in New York City before eventually moving to Sydney at the behest of his mother (who had migrated there in 1946) to design her a house. The result was Rose Seidler House in Sydney’s Wahroonga, which still stands as one of this country’s most exquisite examples of mid-century design.

Its popularity saw Seidler besieged with offers, and he eventually settled in Australia, designing many highly individualised buildings (such as Australia Square) up until his death in 2006. Though regularly feted and awarded, Seidler was a controversial figure throughout his long career.

He often publicly criticised planning authorities and the planning system in Sydney, while his own building designs were the subject of much derision. Many credit Seidler with introducing high-rise living to Australia, and his Blues Point Tower – a monolithic apartment block on the shores of Sydney Harbour – has long been one of the most polarising buildings in the city. “It doesn’t worry me that people have criticised it,” the infamously prickly Seidler told The Sydney Morning Herald in 2002. “What do you expect from illiterate people? They’re insensitive and uneducated, so why should I take that seriously?” 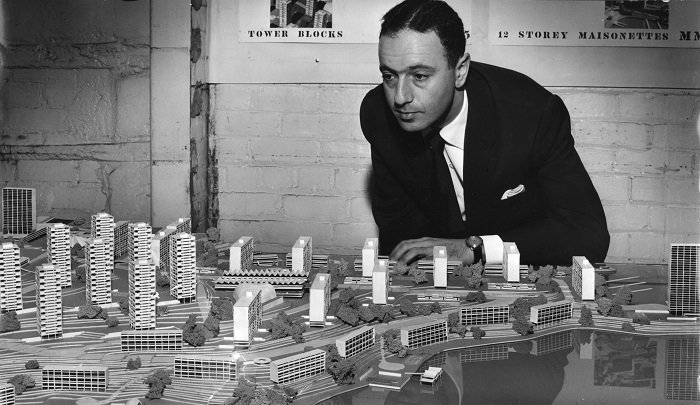 Although Maslin believes that Australia would have caught up with international styles of architecture anyway, she firmly believes that Harry Seidler played a major part in bringing Australia into step with the rest of the world, no matter how controversial that might have been. “There’s no doubt that Harry ushered in a period of urban design that was best practiced in late ‘50s and early ‘60s,” the producer asserts. “It was a real break with more conservative architecture that stemmed from 19th century architecture. So what actually happened when Harry built the first skyscraper in Sydney, it was not just a big tall building, it was state of the art engineering. It was one of the most outstanding buildings internationally. It took Australia out of being a backwater to being at the forefront of modern architecture.”

Harry Seidler was definitely a man of the times, and Maslin believes that he would not have been a fan of modern architecture. “Harry hated post-modernism,” she says. “He thought that the façade and architecture weren’t linked to anything to the use of the building in any real way. He would probably be pleased that we moved out of that period and have hopefully moved into connecting with modernist principals again.”

From building some of Sydney’s most well-known buildings to an award winning social housing project in his hometown of Vienna, as well as various major projects across Australia, Seidler’s legacy is still evident, even ten years after his death. As well as covering Seidler’s private life, Harry Seidler: Modernist truly captures the crucial mid-20th century period of Australian history when both its buildings and the world changed. “Good design doesn’t date,” Harry Seidler once said, and though debate will always rage around his creations, one glimpse at any of his buildings will testify to the timelessness of his work.